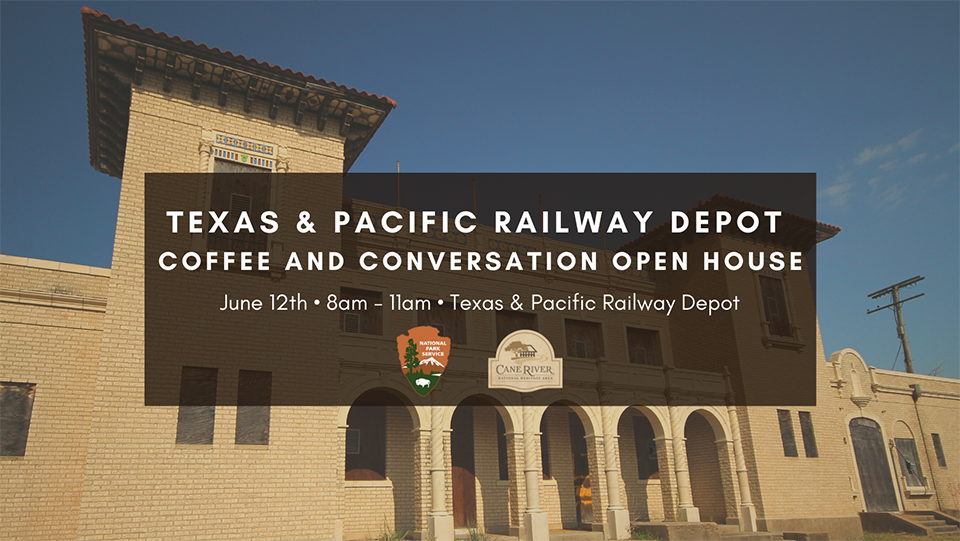 Cane River Creole National Historical Park and Cane River National Heritage Area invite the public to a coffee and conversation open house June 12 from 8 a.m. to 11 a.m. at the Texas & Pacific Railway Depot (Depot) located at 607 Trudeau Street. Visitors are encouraged to share their stories and tour the Texas and Pacific Railway Depot in Natchitoches, Louisiana. In addition, contractors will be on hand to record memories and identify key themes from the Depot’s past.

The event is part of a public input and interpretive project between the park and heritage area to identify stories, memories, and messages from community members that should be presented to visitors at the Depot. The Depot, owned by the City of Natchitoches, has been leased to the National Park Service and will serve as the primary visitor center for Cane River Creole National Historical Park, providing visitors with information about African American history along Cane River and Oakland and Magnolia Plantations. In addition, visitors will be able to tour the Depot and visualize future construction plans. This meeting is a follow-up to conversations held in May at the Ben Johnson Auditorium.

The Depot was constructed in 1927 during the height of the Jim Crow era and was segregated with separate black and white entrances leading to two separate waiting rooms of vastly different quality. The structure was continuously used as a passenger station and later freight station until 1982 when it was abandoned. Today, the structure remains one of Louisiana’s last segregated train stations and has a deep connection to the City’s African American community. Early efforts by the Cane River National Heritage Area in 2001, 2007, and 2015 stabilized the structure until a future use could be determined. In 2019, the City of Natchitoches signed a lease with the National Park Service granting the park use of the building.

If you cannot attend the open house in person but would like to share stories or opinions, please contact the park by email or call 318-352-0383, ext. 316.

Digital Marketing Tips for Newbies – Coffee and Chat with Storm

T-Shirt Business Tips| ARE YOU READY? | Coffee with Tee #3

The Hoddle of Coffee: Tottenham Hotspur News and Links for Monday, September 6

Second Circuit Weighs in on “Best Coffee” (and Puffery)

T-Shirt Business Tips| ARE YOU READY? | Coffee with Tee #3